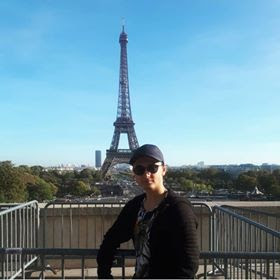 Mariya A. Toneva, who is from the 9th grade in the Hristo Botev Language School in Kardzhali has a new entry on our website – her interview with her schoolmate Veselin, who is currently on an exchange program in France. They talk about the differences and similarities between the two European countries, as well as about the benefits of the European Union.

Meet Veselin Sivkov. He was born in Kardzhali and is 17 years old. A student in the Foreign Language High School – “Hristo Botev” in Kardzhali, he is currently spending an exchange year in Chantily, France, as part of the YFU Bulgaria program. We had a conversation about life in the two countries – Bulgaria and France – and how it feels to be a European in two different countries. Veselin says that he feels very happy and calm in France and adds that he doesn’t feel like coming back in Bulgaria in the end of June. He is already making plans about studying in Paris after he graduates… and even considers living there afterwards. He shares that he got used to the place and his new family very quickly and he definitely recommend France as a top European country.

But let’s talk about the differences between Bulgaria and France and, after that, the similarities. “In my opinion, the two countries differ a lot in many ways, such as in the economic situation and when it comes to education. Also, here in France many people want better pay for their work. By talking about these things, France has become one of the best countries in Europe for me”, Veselin says. He adds that in France gay marriages are legal, which he also finds positive. “In some European countries, this is of great importance because people want a place to live, even if they have different sexual preferences”, he shares.

On the other hand, he tell us that, despite many different, the two countries have great history and things that we should be proud of… and so does every country in Europe and the world.

We discuss how his travel from Bulgaria to France was easy because there was no need to get visas or an international passport. He says that the fact that the two countries are in the European Union makes his travel very easy. “Also, many of the museums are free of charge in Paris for persons under the age of 18, provided they live in Europe”, Veselin says. He concludes that there are many positive sides, your country to be in European Union… such as traveling freely between countries.

We started the topic of whether he feels European, why is that and where does he feel “more” European – in Bulgaria or in France? “Personally in France I feel more European because it is a new country and everywhere, even if you are in a museum, there are flags with the stars of the European union. I feel Bulgaria as my home country and that’s why I sometimes forget that we are part of this union too”, he says, adding that the European Union helps a lot to all the countries in it. For example, to Bulgaria, with its economic and social problems, but also to many other countries. “If most countries were not part of the European Union, they would not have become what they are today”, he says.

In conclusion, he shares that he is very proud of what he had seen and done in France. He is very happy and thankful for the opportunity to travel to this unique European country. The program “ YFU Bulgaria” is about students, who wants to travel and experience new things. And if you want to go to an exchange year in some European country, this program is for you. Check their site – yfu.bg or their instagram – @yfubulgaria for more information. “If someone has questions about that ,you can search for me in Instagram – @Imvesko, and talk to me whenever you want”, Veselin says, with a smile on his face.