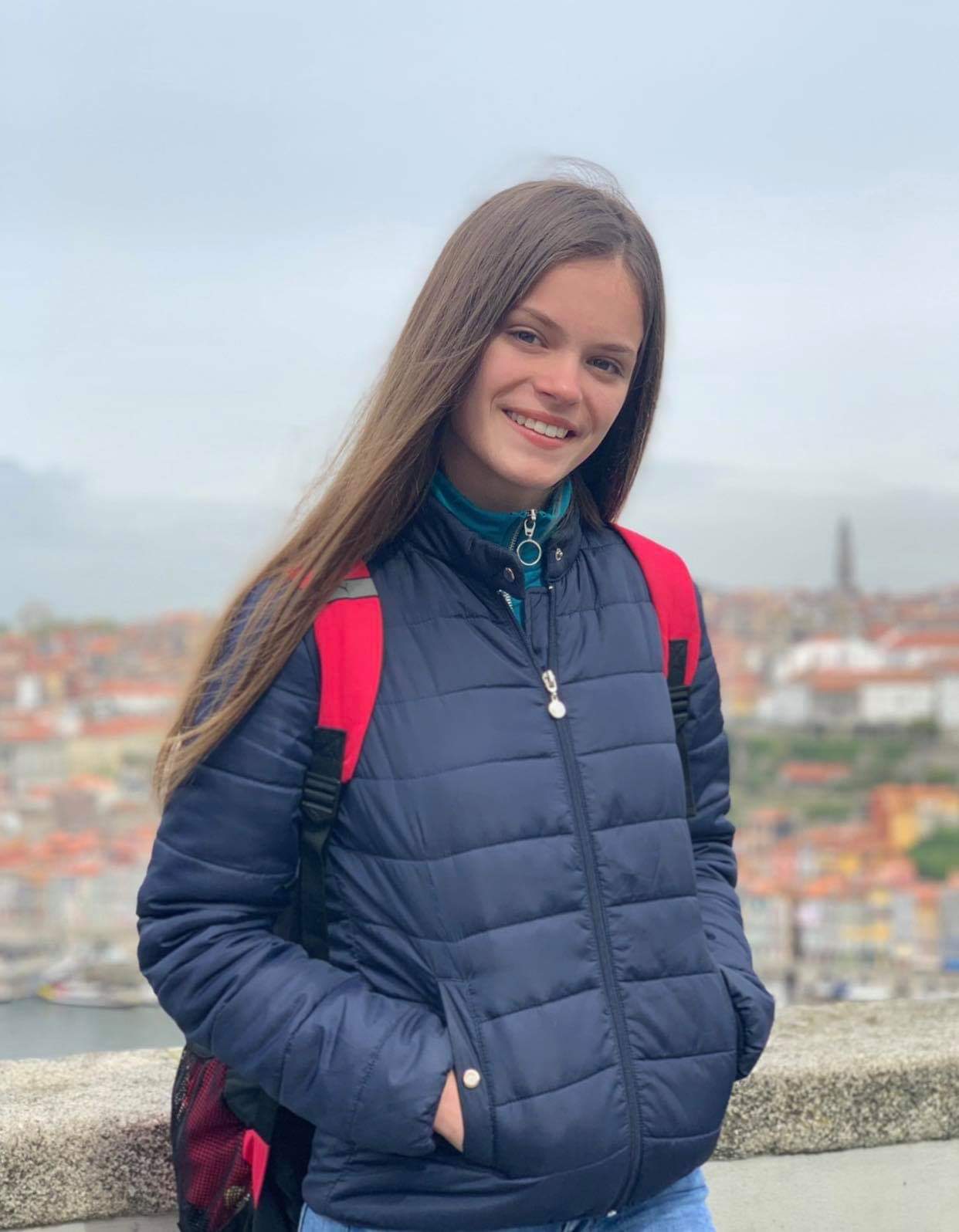 Monika Genkova: I am truly proud that our school is working with an European program which enables the students to develop and meet new people

Preslava Kurteva, 10th-grader at “Vassil Levski School” in Sevlievo, focuses her story on the advantages of  European programs. She talks to a student, who participated in the Erasmus+ project “Mathematics around us” in Portugal.

In 2019, the Municipality of Sevlievo received a prize for acquiring the most European investments in the field of educational infrastructure. There is no school, kindergarten or nursery, which has not been renovated with European investments. This produces a very good learning and working environment for both students and children, as well as their teachers. Another advantage for students in Sevlievo is their participation in various projects of European programs such as Erasmus+. At the end of March, students from Vassil Levski School – Sevlievo – Monika Genkova and Presiana Ganeva from class 8b as well as Stephanie Hristova from class 7a visited Portugal together with their teachers Daniela Dimitrova – Mathematics, and Daniela Hristova – English. Their visit was part of the Erasmus+ “Mathematics around us” project, which aims to show students unusual and interesting ways of studying math. “I am truly proud that our school is working with an European program which enables young people to develop and meet new people,” Monika Genkova told me. These words are also the reason for our conversation about her impressions of her involvement in this project.

Because this was an opportunity for me to practice my English and meet new friends. I could have gone to Barcelona (Spain), but my parents have been to both places and recommended Portugal to me and especially Porto! So my best friend and I went to Portugal and spent an unforgettable spring break thanks to the Erasmus+ program.

Each country has a math-oriented theme. Our topic was “Mathematics in Architecture” and Portugal’s topic was “Mathematics in Games”. We were supposed to photograph symmetry in nature and then make an exhibition. Me and my friend, Presiana Ganeva, prepared the exhibition and the photos, and Stephanie Hristova made an e-calendar with a mathematical theme. Then we had to talk in front of a camera in English about a traditional game of ours and we chose “Do not get angry!” For the final three tasks we had to make memory cards and dominoes with mathematical equations and shapes, as well as an electronic game. It was a lot of work, but trust me, it was worth it!

All family members were very nice, positive, caring, fun. The best foster family I could have had. It included the mother, father and their daughter, Leonarda. In May, she will come here as an exchange student. In general, all people in Porto are different than us. They are nicer and warmer, but their houses are very cold. They do not heat them up. Instead, they walk around in bathrobes over their clothes. My foster mother even took me and Leonarda to school in a bathrobe. This does not mean they have no money, it’s just a custom of theirs. Everywhere in the house they walk with shoes on, which was very strange to me. I also noticed that the people there love shopping! We went to shop for clothes twice in a week. My new friend, Leonarda, took me to hip-hop dancing, and I showed her some karate strikes. We showed each other our hobbies. It was fun!

I don’t think their family model is any different from the one in Bulgaria. Leonarda was the only child, and her parents bought her whatever she wanted. What is different there is that they spend a lot of time with their cousins. Her cousin Kika, for example, was with us the whole week. The time when we weren’t at school, we spent just the three of us. I met so many of her cousins that I started writing down their names because I couldn’t remember all of them. Even one evening while we were having dinner, two of her mom’s aunts showed up, along with three of her cousins, her grandmother, and so on. We had gathered together about 12-13 people and it was very nice. An interesting fact is that in Portugal people eat every 2 hours!

They were very caring with me. They treated me like I was their own child. I felt right at home, and leaving them was very difficult. Her dad was often working late, while I, Leonarda, her mother and Kika went shopping, or to a pastry shop, or watched movies together. They really made me feel great in their company.

The first day we were welcomed at the school in Ribordoza with a presentation prepared by the students. It contained information about Portugal. We took a class in French, where the teacher spoke in a mixture of Portuguese, English and French. We had a good laugh.

The second day we had a walk in Porto. First we visited a university, where a math teacher taught us how to juggle and how that was related to math. Then we went to a park where we had picnic. There were peacocks in the park, walking everywhere and you could even touch them. It was incredibly beautiful! Then we headed to the planetarium, where we watched several educational films about the cosmos, we heard a lot about the Moon, and we watched the Sun through special telescopes. Lastly we went to the seashore and there we spent about 2 hours relaxing on a lawn by the beach. It was a lot of fun! Personally, I liked the second day the most!

The third day we spent at Leonarda’s school in Villela. There we played math games and then we had an orienteering competition. At the very beginning, when we headed to the woods, they played the anthem of Bulgaria.

On the fourth day we were back in Porto, where we visited the Serra do Pilar Monastery. We also visited Escher’s exhibition, who has incredible paintings carrying hidden messages and mathematics. Completely unique!

The last day was the hardest! In the morning we attended a presentation made by members of the “European club”. Then they had prepared for us something like a small game contest. I won two medals, but I gave one of them to Leonarda, because I wanted her to have it as a keepsake of that day. It was our last day together at school and we were really sad. Oh, how we all wept. We made a promise that we would meet again at all costs! No matter how. Even after only five days together we became so very close! We still keep in touch and we video chat but it’s not the same!

We communicated in English and we had no issues. Their English wasn’t as good as ours, but we understood each other.

From the local cuisine I only tasted the “Francesinha” dish. Most of the time her mother was taking us out to restaurants or was cooking something healthier, because she was under the impression that since I was an athlete I wouldn’t eat any junk food.

The most amazing impressions that I have are of the people, their warm attitude and their ability to have fun. I miss them the most!

I learned some words in Portuguese. Also some things about hip-hop dancing and somewhat how to juggle. I also became better at volleyball! It is surreal how much my participation in this program has helped me.

So they can learn to work in different conditions and at different pace; to acquire qualities such as responsibility, efficiency, honesty. And last but not least, to broaden their worldview, to see new places, to meet new people, to draw from the experience of others, and to overcome the language barrier.