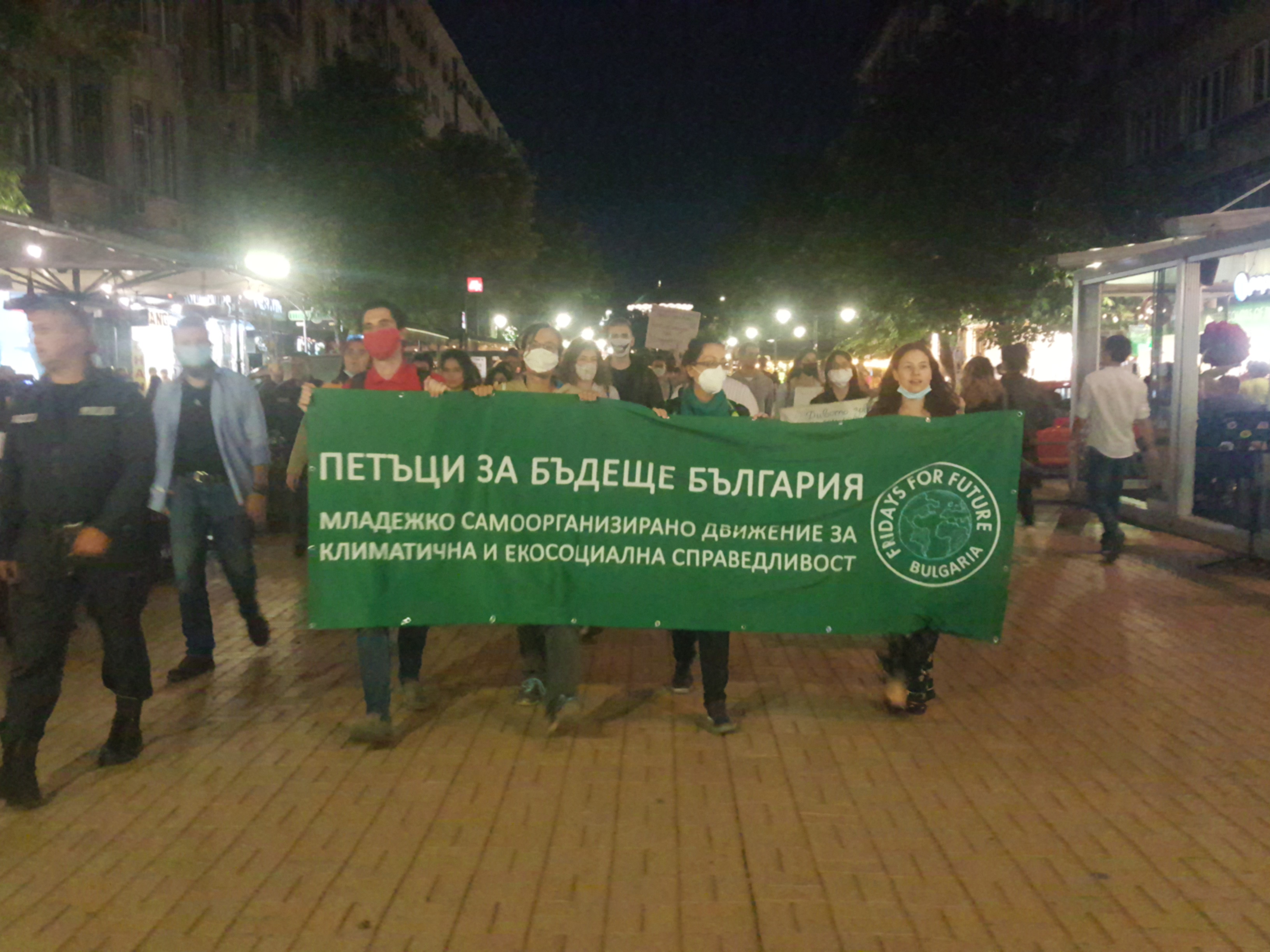 September 25-26 marked the revival of in-person climate change protests after months of decreased activity due to the COVID-19 pandemic. Protest marches were organised all over the world, the North Pole included, under the title of Global Day for Climate Action. Due to anti-pandemic measures prohibiting mass gatherings, climate activists had to halt their planned demonstrations and move online. With the help of social media, they organised the so-called “online protests,” which limited physical contact while still allowing activists to discuss how to pressure stimulate a permanent transition to renewable energy sources. Dara Sapundzhieva from the American College of Sofia tells their story:

After six months of following the COVID-19 restrictions, Fridays For Future Bulgaria  organised a March for the Climate, which aimed to remind the citizens of Bulgaria that the climate crisis should not be overshadowed by the global pandemic. The organisers’ goal is to pressure the authorities to undertake immediate measures, on an international and state level alike, in order to prevent and adapt to the effects of climate change.

Despite of the fact that the event took place outdoors, the organisers of the march insisted that attendees consistently use face masks, regularly disinfect, and keep physical distancing.

An “online protest” was also organised in social networks for those who preferred to keep physical distancing; they could still show their support by sharing a photo with a message in support of the fight against global warming. 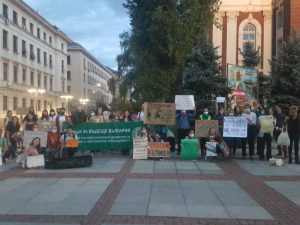 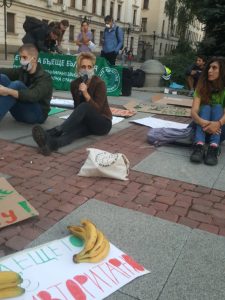 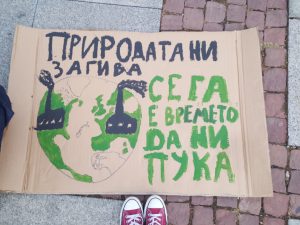 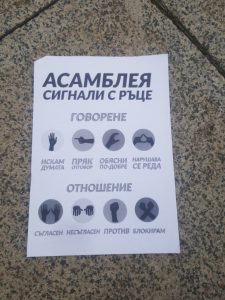 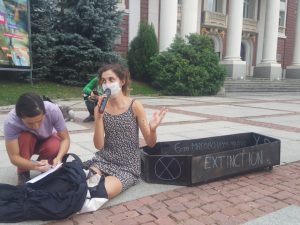 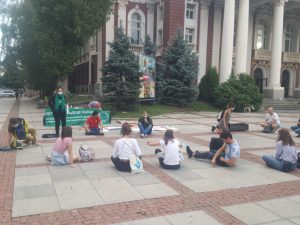 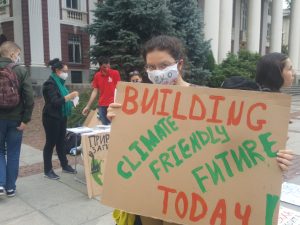 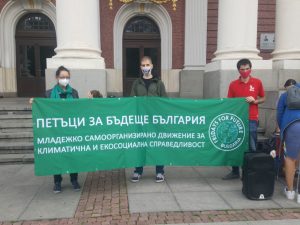 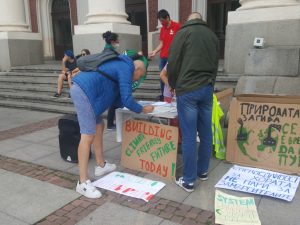 The event commenced at 18:00 in front of the National Theatre “Ivan Vazov.” There, an assembly of the gathered eco-activists convened. The topics discussed included effective ways to combat the climate crisis and whether the responsibility for actions ought to fall on the individual, society as a whole or the government.

Varying opinions were voiced during the discussion. Some focused on the importance of citizenship and government’s power in dealing with the climate crisis. For instance, one part of the eco-activists shared their disappointment in the absence of adequate green policy and eco-social justice in the Bulgarian political system. One example shared in the group was related to the first-reading adoption of the General Development Plan for construction within a 300-meter perimeter from the Black Sea coastline and in the “Strandzha” Nature Park.

“We also support the recent anti-government protests because we believe that the current government is incapable of identifying the measures necessary for combating the climate crisis or making them a reality,” shares Radi, one of the activists at the protest. According to this portion of the environmentalists, the only way to undertake prompt measures to overcome the threat of reaching the critical 1.35 temperature increase threshold would be for people to put pressure on representatives of Bulgaria, both within the country and on the European stage. It should be demanded of them to put forth the necessary restrictive measures that would serve to decrease levels of carbon dioxide and to forbid single-use plastics. “Systemic changes would be much more effective because they would be enacted within the shortest time frame possible. If we were to wait for everybody to change their worldviews and daily habits, or to become more informed about these issues, we would not be able to act until it is too late,” said Petar, another eco-activist.

Bulgaria experiences not only an ecological collapse, but a social one as well, according to some protestors. Many others, however, expressed their belief that even the smallest steps lead forward on the path of change. “I believe that each one of us should be responsible for what will be left for the future generations,” said Kremena, a young environmentalist. “The individual choice that each person should make is to become a member of an organisation which unites everyone.”

At 19:00, after the end of the assembly, the March for the Climate finally began by taking a route going in the opposite direction of the anti-government protests to ensure physical distancing. The route started in front of the National Theater “Ivan Vazov” and then it moved towards Saborna Street, Vitosha Boulevard, National palace of culture and finished in the South Park.

Representatives and followers of non-profit organizations such as Say It, Extinction Rebellion Bulgarian and Food Not Bombs – Sofia  also shared their solidarity and support. They brought a symbolic coffin, which aimed to represent what would happen not only with the planet, but with the entire humanity as well if the necessary measures for dealing with the global warming are not taken on time.

“With every meeting that I attend, I become more convinced that things are changing for the better. Of course, we have a lot of work left to do before that change results in real positive outcomes, but I don’t think we should leave space for despair or panic. What we should make space for, instead, is hope,” adds Yana, student at the American college in Sofia and one of the youngest activists at the gathering. “My mission here is to learn as much as I can and pass that onto my classmates. I believe that the main problem here begins with education, and that is how we can eradicate it. From a young age, children need to be taught that they have the power to enact the change that we so desperately need.”

Krasimira Kamenova helped translating this piece from its Bulgarian version.

Latest posts by Дара (see all)