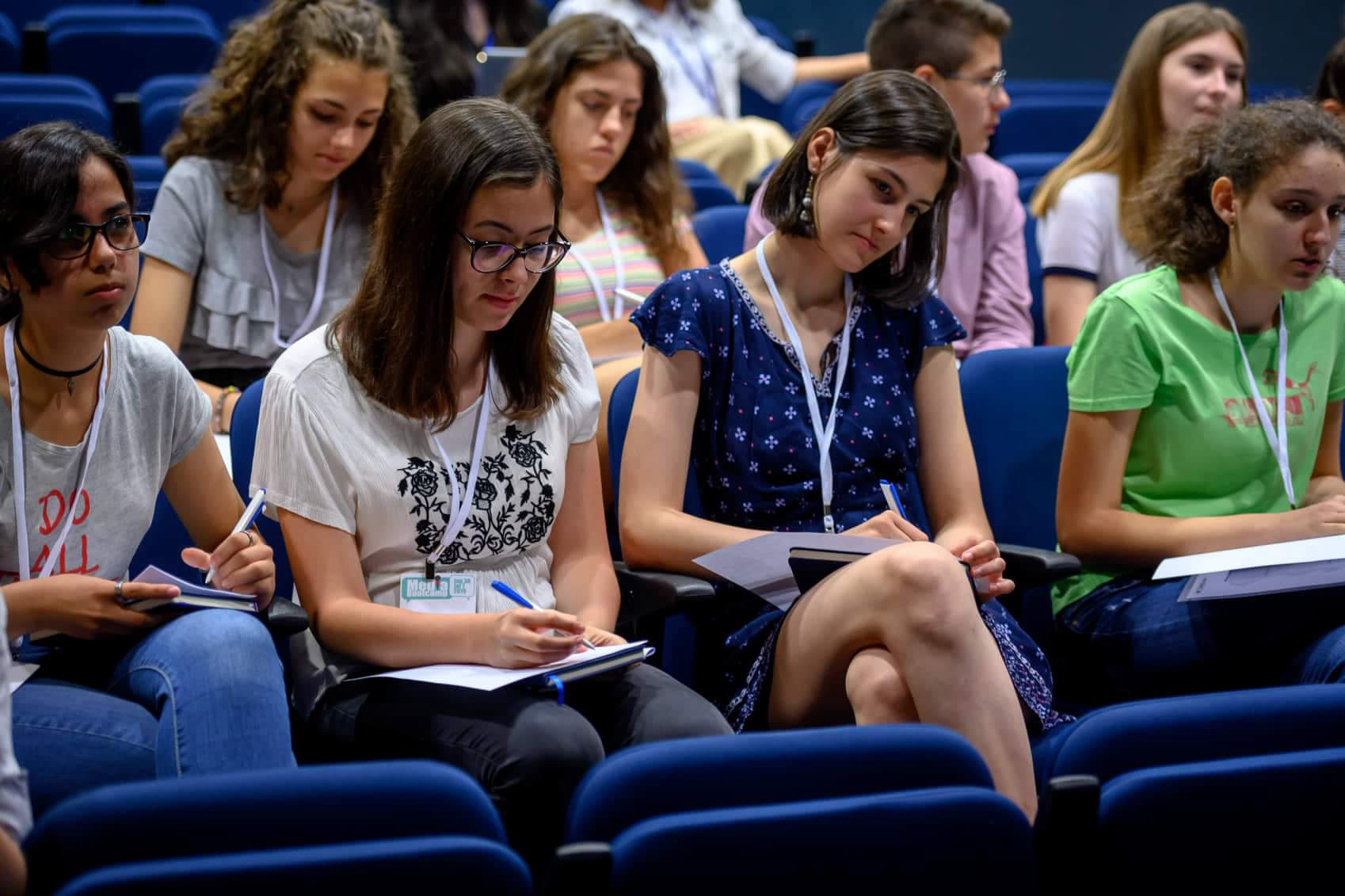 Elena Zaharieva from the National Trade and Banking High school was one of the participants in the media bootcamp in Blagoevgrad in July. Check out her interviews with some of the lecturers and the other students and get an impression what is like to be a media student for a week.

Are you ready to go back in time? Let’s make a little trip to the Media Bootcamp in Blagoevgrad which took place from June 30th to July 7th  2019. Are you ready!? Here we go!

We are currently on the central street of sunny Blagoevgrad and after a short walk under the beautiful umbrellas, we are heading to the AUBG campus where the first of its kind Media Bootcamp, organized by The Association of European Journalists in Bulgaria and the Bulgarian-American Fulbright Commission, is now taking place.

One ice cream later we are on campus where for one week 20 Bulgarian high school students are finding answers to questions such as how to distinguish fake from real news, how to make a podcast, what is and what is not photojournalism and much more with the help of media experts from Bulgaria and all around the world.

We are passing by Scaptopara 3 where the future journalists are staying but since we will hardly find any of them there during the day we are heading to Balkanski, where most of the campers’ lectures are taking place. In front of hall 103 we come across two of the lecturers and mentors – Marko Zoric, editor at BBC Global News, and Robin Brinkworth, program director at the Student View.

Why did you decide to take part in this project?

Marko: “I took on the project because I like sharing my experiences with want to be journalists, helping them navigate the industry and also guiding them through the fast changing industry.”

Robin: “The Student View was asked to take part and we love teaching kids about journalism, so it was a no-brainer really. We teach a lot in the UK, so it was also exciting to see the cultural differences between children in the UK and children in Bulgaria. New experiences are always worthwhile.”

If you could turn back time would you have made the same decision?

Robin: “Yes, of course I would come again. I really enjoyed it, teaching the group was fun, and meeting the other mentors was a valuable experience.”

Was this your first time in Bulgaria and did you enjoy your stay here?

Marko: “It was my first time in Bulgaria. I loved the curiosity and generosity of the people. I also loved the food and the similar culture to my own.”

Robin: “Yes it was! I did enjoy it – Bulgaria is stunning and I love getting to know new countries, but the key thing was meeting new people. As a group, you are a remarkably talented bunch of young people, and the mentors and organisers are all fascinating individuals too.”

What is the one thing that you will remember this camp for?

Marko: “I remember how tenacious and talented the people on the course were. To develop, film and edit a piece of content in such a short space of time is so mean feat.”

Robin: “I could pick out a lot of different things – the food, the environment, the journalism, but I think I’ll settle on the people. Both mentors and teenagers brought an abundance of talent and joy to the camp, and I loved meeting every one, particularly given the diversity of experiences people have had.”

We are leaving the building and we are again under the burning sun, where we meet seven of the participants – Stephanie, Dayana, Alexandra, Alex, Sofia, Nicole and Mariya, who are currently working on their media projects but unfortunately they will have to stop for a while in order to answer our questions about their time during the camp.

What inspired you to apply for this camp?

Stephanie: “The thing or rather the person who prompted me was my English teacher but she only gave me the idea and the person who inspired me was a stranger at the theatre who heard me talking to a friend about the camp and told me I would not go wrong with journalism. And I wanted to see if he was right.”

Alexandra: “When I filled out the application form, I wrote that I loved challenges. I was tired of the people and the problems that surrounded me. I needed to experience something new and different, I wanted to get out of my comfort zone and learn new things. And since I work in the radio at my school it was extremely important for me to enrich my knowledge of journalism.”

Mariya: “I really want to become a journalist, this is my childhood dream. And the Media Bootcamp was the perfect place to take my first steps in my future career. I also liked the idea and the place very much.”

What was your reaction once you found out you were chosen to take part in the program?

Alexandra: “When I found out that I was accepted and would participate in the journalism camp I was in the city centre of Varna. I started jumping with joy, I could not believe I would go to the American University and meet some of the journalists whose articles I have been reading for years. I felt like I had just won 1 million from the national lottery.”

Sofia: “An interesting fact is that I did not find at first that I was accepted. At the first stage of the admission, a friend told me that the results were out and I was disappointed because I had not received an email or at least that’s what I thought. I decided to check my spam and it turned out I was accepted. I experienced all positive feelings, unlike my previous disappointment. The moral of the story – always check your spam.”

Mariya: “This is an interesting story. I was in physics class and suddenly I received the email. I started screaming and jumping with joy. The teacher got very angry, but I was happy!”

What was the biggest difficulty you encountered while working on your media project?

Dayana: “My teammates were extremely skilled in every aspect, which helped us prevent any stressful situations because we relied on each other and we had no concerns about the successful completion of the project. However, we encountered very little difficulty at the outset – we were all interested in very different topics, so it took us a while to choose the final focus of our project.”

Alex: “The biggest difficulty was to find someone close to Konstantin Chorbadjigoshev who would tell us more about him. So after a rather disappointing refusal, we met Snezhana Zaharieva who turned out to be an extremely friendly and responsive woman, who has been working as a curator in the Historical Museum in Blagoevgrad for 30 years.”

Nicole: “Definitely the most difficult part of the projects was the technical part – although we had enough material we did not know how to start sorting and arranging. We had to use an audio program for the first time without anyone’s instructions. If we didn’t have team spirit and communication, nothing would have worked out! ”

What is your favourite memory from the camp?

Stephanie: “I can not determine a favourite moment, but perhaps the most fun was the taxi ride during the game with Marto and Emmy and most memorable – when we discussed the delay of the development of the Bulgarian culture under the Ottoman rule”

Dayana: “I can’t classify a certain moment as the most significant or distinctive, as the other participants surprised me more and more every single day – each one shared interesting facts about their own experiences in journalism, academic achievements and more, driving me to admire not only their intelligence but also the kindness and tolerance they all have. I am very glad that nothing stopped me from participating in the camp because this experience left an indelible trail in each of us and created indestructible friendships.”

Sofia: “There are too many wonderful memories from the camp but I think my favourite one is July 4 when we went to the tavern and celebrated America’s Independence Day in the most Bulgarian way. I think we bonded a lot that night.”

Nicole: “My favourite memory from camp is every night with my girls. Inside or outside, day or night – we always managed to be cheerful. I will never forget the night when we went out at midnight to sneak into the Serbian baseball team’s dorms. Even though it was unsuccessful, fate smiled at us and on the next day, the boys from the team ran into us all of them shirtless.”

After this pleasant walk, it is time to go back to the future because the participants are going to the next lecture of the day to gain even more knowledge and understanding of the exciting world of media and journalism.